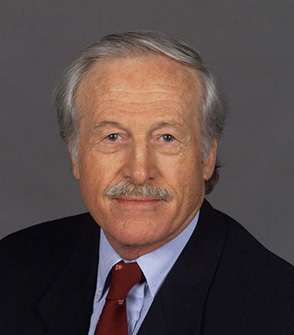 Kenneth Hanson graduated from Cornell University in 1963 with a Bachelor of Science degree in Engineering Physics, a relatively new five-year program offered by the Engineering School. At the urging of his advisor, Henri Sack, Ken studied for one year (1961-62) in Germany with the Junior Year in Munich program administered by Wayne State University.

Hanson received MS and Ph.D. degrees in Physics from Harvard University in 1967 and 1970, respectively. While at Harvard, he was member of a team of researchers who carried out a series of experiments at the 6-GeV Cambridge Electron Accelerator. The team used coincidence techniques to investigate electron scattering from hydrogen and deuterium, and electroproduction of nucleon resonances. Hanson returned to Cornell's Laboratory of Nuclear Studies in 1970 as a post-doctoral research assistant to participate in a series of experiments investigating high-energy electron and photon interactions, in which field he is a co-author of 31 papers.

In 1975 Hanson joined the Meson Physics Division at the Los Alamos Scientific Laboratory to demonstrate the usefulness of medium-energy protons for performing medical computed-tomography (CT) scans. That effort yielded low-dose proton CT scans of human specimens, some of which were shown by Allan Cormack in his Nobel lecture in 1979. The proton CT project led to Hanson's deep interest in the field of medical-physics, especially the characterization of random fluctuations (noise) in images by means of their noise-power spectra and the resulting consequence on image interpretation.

From 1980 to 2001 in the Dynamic Testing Division, Hanson investigated basic problems in image analysis, often with the goal of interpreting dynamic radiographs. Areas of research included tomographic reconstruction from limited data, evaluation of reconstruction methods based on visual task performance, interpretation of images in terms of models, and Bayesian methods of reconstruction and modeling. In the 90s he co-developed the Bayes Inference Engine (BIE), a flexible radiographic modeling tool that is still used at LANL to analyze dynamic radiographs. Crucial to the success of the BIE was the technique called adjoint differentiation, which allows the sensitivities with respect to the numerous model parameters to be efficiently computed. Hanson employed that technique as the basis for inversion of the diffusion equation for optical tomography using transmitted IR photons. He explored efficient methods for estimating uncertainties in complex Bayesian models by sampling multidimensional posterior probability distributions using advanced techniques such as Hamiltonian (Hybrid) Markov Chain Monte Carlo, which relies on adjoint differentiation. He has published over 110 articles on imaging science, mostly in medical-imaging journals.

Hanson has had the opportunity to work with researchers at several other institutions. Starting in 1979, he spent a week at the Center for Devices and Radiological Health of the FDA to discuss with Robert Wagner the limits of diagnostic performance of image tasks imposed by their noise characteristics. That annual collaboration with Bob and his colleagues (including Kyle Myers after 1985) became a tradition for many years. Taking a leave of absence from LANL in 1986/1987, Ken spent a year working at CGR, the French medical imaging firm (later to become part of General Electric Medical Imaging Systems). He collaborated with French researchers to develop a revolutionary x-ray scanner devoted to imaging blood vessels and bone. In 1999 Hanson was invited by Volker Dose to spend six weeks at the Max Planck Institute for Plasma Physics in Garching, Germany. There he worked with scientists on an innovative technique for estimating the background in measured spectra, which was subsequently published in Physical Review E.

Hanson retired from LANL on July 1, 2004, but continued to work part time at the Lab. In January 2005, he joined the Nuclear Physics group (T-16) in the Theoretical Division as a Laboratory Associate with the goal of assessing the uncertainties in compiled neutron cross-sections. Among the challenging problems he addressed were inconsistent data sets and the full treatment of systematic uncertainties in cross section measurements. Examining historical lifetime data for several fundamental particles, Hanson showed that their distribution is decidedly non-Gaussian; it possesses a long tail, consistent with a Student t distribution. Between 2008 and 2010 he was a Guest Scientist at LANL with the same group.

Between 2011 and 2016, Ken consulted with a geophysics group (EES-17) at LANL on an exciting project aimed at enhanced ultrasound breast imaging. The goal was to apply advanced geophysics reconstruction techniques to significantly improve 3D ultrasound scans. At the University of New Mexico, scores of patients were scanned with the initial ultrasound system, which consisted of two opposing linear arrays of transducers, placed on either side of a patient's breast.

Hanson has helped organize several other meetings, including the Workshop on Maximum Entropy and Bayesian Methods, held in August 1995 in Santa Fe, and the Fourth International Conference on Sensitivity Analysis of Model Output, held in Santa Fe in March of 2004. He chaired the Workshop on Quantification of Uncertainties in Physics Simulations (QUIPS), Los Alamos National Laboratory (internal), in 2002.

Dr. Hanson is a member of the following professional societies: Institute of Electrical and Electronics Engineers (IEEE), Senior Member, American Physical Society (APS), and the Society of Photo-optical Instrumentation Engineers (SPIE). He has been a member of the International Society for Bayesian Analysis (ISBA), American Institute of Aeronautics and Astronautics (AIAA), Society for Industrial and Applied Mathematics (SIAM), American Association of Physicists in Medicine (AAPM), and American Association for the Advancement of Science (AAAS). He has reviewed numerous manuscripts for leading journals.

Photography has been Ken's lifelong hobby, starting with the Pocket Kodak camera he used to take B&W photographs at Boy Scout Camp on the west side of the Tetons. In graduate school, he took his film SLR everywhere and has myriad slides from that time. After retiring in 2004, he had more time to spend on this hobby so he bought a digital SLR to record his wife’s and his first trip to Alaska in 2007. Since then, his hobby has evolved into a deep passion for wildlife and nature photography. Wildlife photography is especially challenging because a good photograph requires adept camera technique, patience and good luck, which makes it extremely gratifying to capture a striking picture. His favorite subjects have included birds, insects and flowers from around Los Alamos; whales, bald eagles and glaciers in Alaska; grizzly bears in British Columbia; water birds in Florida; and iguanas and frigatebirds in the Galapagos. Ken's photographic prints and cards are featured at the Fuller Lodge Art Center in Los Alamos. Some of his photographs can be seen at hansonhub.com/photogallery .

Back to my homepage